LINUX on the Sony VAIO PCG-505TR 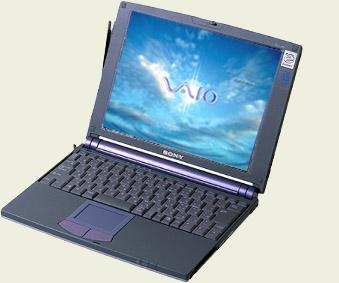 The authors purchased two Sony VAIO PCG-505TR computers ($1495/each) from www.cdw.com. (Note: I don't know of any company, including CDW, that still carries 505TR's.) We chose this Sony model because of the small size, high screen resolution, and Linux compatibility described by bfields and jfreund on the Linux on Laptops page. The newer N505 costs no more than the 505TR and features a faster Celeron 333 processor, but dwhysong and liz have both reported significant incompatibilities when using the N505 with Linux.

The first author previously owned an NEC Versa 2730MT, which weighed over 7 pounds. He hardly took it anywhere because it was too heavy; the VAIO is small enough that he carries it with him often, which results in it being used much more. The small keyboard and screen takes some time to get used to.

We were both pleased with CDW's service. However, our laptops appeared to be DOA! The solution is to plug the laptop in for approximately 20 minutes to charge the internal battery so that the machine will boot up. Our machines would not turn on before charging the internal battery for a few minutes!

"I" in the description below refers to William, and all email enquiries should be directed to [email protected]. Please do not send me Microsoft Windows related questions, as I don't know anything about Microsoft Windows.

We performed the following steps:

The Sony VAIO PCG-505TR uses the ESS-1879 chip set. This chip set was not supported until kernel 2.2.11. If you are using an earlier version then you will most likely need to use the OSS sound software. Otherwise upgrade your kernel to 2.2.12 (this has some bug fixes). I had to do this since I use SUSE 6.2 which is based on the 2.2.10 kernel. Once this is done, then the 100% Soundblaster Compatible entry in the kernel should work.

There is a bug in the kernel for the ESS-1879 sound chip that I have found. This problem occurs when booting into Linux from Windows without powering down the computer first. A register, 0x71, in the sound chip can have values programmed into it that will alter the sample rate algorithm of this chip. On my system this results in sample rates below 22050 being set wrong. This register does not get reset with a software reset. The kernel does not zero out this register. The work around is to power down the computer when exiting windows and before entering Linux. I have reported this to the author of the module that supports this chip, so this should be fixed in a future kernel. If you are an experienced kernel developer then here is the fix.

Change file drivers/sound/sb_ess.c.   Add the following code to the function ess_init, at the end of the function:

If you have never modified a kernel before, then I don't recommend doing this. You can get into really big trouble. This fix should work for kernels 2.2.11 thru 2.2.14.

At first we thought one of our machines was extremely slow, but fortunately this was because of a power management problem. In the BIOS, I set the CPU to slow down when it is not heavily loaded. Unfortunately, under Linux this resulted in the CPU running at 1/4th speed all of the time.

I bought a 64MB RAM chip for $199 from Coast-to-Coast memory. I was not pleased with their service; for example, they told me repeatedly that the memory would cost $119 instead of $199, but charged me $199. This isn't the place to go into more detail about their poor service; at least the memory arrived and works. The installation was easy: I followed the very detailed instructions on the Sony web page, which involve turning everything off, removing a single screw from the bottom of the unit, inserting the RAM chip, and putting the screw back in.

I am using a Linksys EtherFast 10/100 PC Card (PCMPC100). A common problem with this card, which is well-documented here, is that after suspend-resume the card runs 1000 times as slow as it should. On that web page, someone suggested that restarting the eth0 interface () would temporarily fix the problem, and it does.

Since nobody seems to have found the true source of the problem, I am using the following fix. I add a single option to /etc/pcmcia/network, as follows:

With this change, the ethernet card always works correctly. I am confused as to why the "resume" option doesn't already exist, as it is called by the cardmgr daemon when resuming from suspend:


Next we describe how to use a PCMCIA ethernet card and the built-in modem at the same time.

Clock problem: suspending and then resume resets the clock to be exactly eight hours slow in Linux. Thanks to Ed Schlunder who told me the solution:

The keyboard layout on the VAIO leaves something to be desired; perhaps this is because Sony squeezed in two Windows keys. In Linux it is easy to re-arrange the keys. Here is an example.

I use an Olympus D340R digital camera, which communicates with my laptop via the SERIAL port. At under $300, the D340R is simple and inexpensive, but produces crisp photos. I am aware of two programs for downloading digital photos: photopc and gphoto. I've found that gphoto frequently crashes when trying to download a large number of pictures; this seems to be because the laptop somehow can't keep up with the camera. On the other hand, photopc sort of works the option "-s57600"; however, photopc doesn't understand the date stamps on the pictures, and doesn't provide a nice X-windows interface for editing pictures.

I wrote a perl script go-camera.pl, which, when combined with gphoto, works very well for me.

The Rio 500 MP3 player is supported under Linux. In order to obtain support for the USB port, I upgraded to the (unstable) linux kernel version 2.3.47. Everything worked fine, as long as I didn't turn the laptop on with the RIO plugged into the USB port. To enable communications with the RIO, I execute the following script: After upgrading to kernel version 2.3.47, a few things broke. Most noticeably, when I suspend under X the VAIO resumes with the screen shifted about 25% to the right. I can fix it by typing "Ctr-Alt-F1" to switch to a text console, and then "Alt-F7" to switch back to X.

There is some support for the onHand PC under Linux.

There seems to be absolutely no support whatever for the Olympus DS-150 digital recorder, or the files it produces, under Linux. The only solution I've found is to run Windows 98 under vmware.

The sound is (usually) nothing but a hissing squeal under VMWARE 2 with Windows 98. Andrew Nguyen also experienced this problem, but reports that the Olympus DS-150 player works under Windows 2000 with VMWARE 2.

Email me at [email protected] with questions or comments. I will add any interesting solutions we find to this web page.